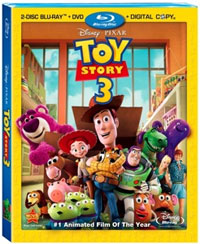 “Toy Story 3” welcomes Woody (voice of Tom Hanks), Buzz (voice of Tim Allen) and the whole gang back as Andy prepares to depart for college and his loyal toys find themselves in… day care!  These untamed tots with their sticky little fingers do not play nice, so it’s all for one and one for all as plans for the great escape get underway. More than a few new faces—some plastic, some plush—join the adventure, including iconic swinging bachelor and Barbie’s counterpart Ken (voice of Michael Keaton), a thespian hedgehog named Mr. Pricklepants (voice of Timothy Dalton) and a pink, strawberry-scented teddy bear called Lots-o’-Huggin’ Bear (voice of Ned Beatty).

The DVD version, featuring an anamorphic widescreen transfer with Dolby Digital 5.1 audio will also include a good number of extras, such as the Pixar Short ”Day & Night” that opened the movie in theaters.

Also included are a series of Featurettes, including ”Toys!”, giving you a closer look at all of Toy Story 3’s beloved toys from updating the classic characters to the creation of the Sunnyside Daycare and Bonnie’s Room toys. Also included is the Featurette produced in conjunction with NASA, ”Buzz Lightyear Mission Logs: The Science of Adventure”, a hybrid animation documentary of Buzz’s visit to the International Space Station that focuses on research in zero gravity and Buzz’s triumphant return to Earth.

Further, look for ”Paths to Pixar: Editorial” in which Pixar editors, past and future share anecdotes about their careers, as well as ”The Gang’s All Here”, a touching look at the returning voice talent for Toy Story 3 and an introduction to the voices of the new characters.

In A Toy’s Eye View: Creating A Whole New Land is a sneak peek at the new Toy Story-themed playland at Hong Kong Disneyland, while Studio Stories tell amusing animated anecdotes about life at Pixar.

The Blu-Ray Disc version, featuring a 1080p high definition transfer, complemented by a DTS 7.1 HD Master Audio track, will include all of the aforementioned extras from the DVD – though in high definition – and will add another layer of supplements to the mix, such as Cine-Explore, a Commentary by Director Lee Unkrich and Producer Darla K. Anderson, as well as Beyond the Toybox, an Alternative Commentary Track Featuring Leads from Story, Tech, Art and Animation – Commentary by Story Supervisor Jason Katz, Supervising Technical Director Guido Quaroni, Production Designer Bob Pauley and Supervising Animators Bobby Podesta and Michael Venturini.  The release also features a Toy Story Trivia Dash, a cool game that challenges you to sprint to the finish with Woody, Buzz, Jessie and Rex as you quickly answer questions about all three Toy Story movies.

More Featurettes will cover additional aspects of the production, including ”Beginnings: Setting A Story In Motion” in which Screenwriter Michael Arndt analyzes successful opening scenes from Toy Story, Finding Nemo and The Incredibles. Then there is ”Bonnie’s Playtime: A Story Roundtable”, a roundtable discussion with Director Lee Unkrich and the story artists who brought the “Bonnie’s Playtime” scene to life, as well as ”Roundin’ Up A Western Opening”, showing the development of the movie’s exciting opening scene.

In ”Life Of A Shot”, Toy Story 3 artists and technicians describe their contributions to a few of the shots in the film’s “Western Opening,” while in ”Goodbye Andy”, you will be part of an exploration of character design, acting and animation in the scene “Andy’s Goodbye.”

The Featurette ”Accidental Toymakers”, shows how by creating the Toy Story characters, the Pixar filmmakers found themselves in the unlikely role of toy designers. Meet the toy company that took a chance on manufacturing the now iconic toys and learn of their incredible success that began with a modest number of Woody and Buzz Lightyear toys 15 years ago.

Last, but not least, you will also find the ”Making of Day & Night” on the release, telling the story behind the unique 2D/3D blended short.