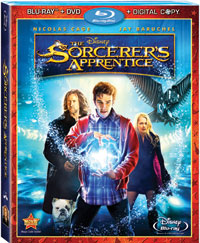 Disney brings The Sorcerer’s Apprentice to DVD and Blu-Ray

Walt Disney Home Entertainment has just added The Sorcerer’s Apprentice to their line-up, bringing the film to DVD and Blu-Ray Disc in November.

A fun, modern-day adventure follows Dave (Jay Baruchel), just an average college student, or so it appears, until the sorcerer Balthazar Blake (Nicolas Cage) recruits him as his reluctant protégé and gives him a crash course in the art and science of magic. As he prepares for a battle against the forces of darkness in modern-day Manhattan, Dave finds it is going to take all of the courage he can muster to survive his training, save the city and get the girl as he becomes “The Sorcerer’s Apprentice.”

The DVD version of the movie will feature an anamorphic widescreen transfer with Dolby Digital 5.1 audio and will also include The Making Of The Sorcerer’s Apprentice and the Deleted Scene “Balthazar Recruits Dave.”

The Blu-Ray version will feature a 1080p high definition transfer, accompanied by a DTS 5.1 HD Master Audio track. In addition, the release will contain Deleted Scenes and Outtakes, as well as a number of Featurettes, such as ”The Science Of Sorcery,” “Making Magic Real,” “The Fashionable Drake Stone,” “The Grimhold: An Evil Work Of Art,” “The Encantus,” “Wolves & Puppies” and ”The World’s Coolest Car”. Further, Go behind the scenes and on location to learn all about the making of The Sorcerer’s Apprentice: Magic In The City.