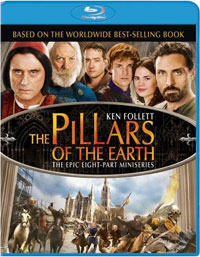 Sony Pictures Home Entertainment has added the eight-part miniseries The Pillars Of The Earth to their line-up, bringing the film to DVD and Bl-Ray Disc in November.

Based on the novel by Ken Follett and set in 12th Century England in the fictional town of Kingsbridge, the epic story of “The Pillars Of The Earth” revolves around the building of a cathedral and follows the lives of three men over 40 years as they each deal with politics, war, romance and personal ambition.

The DVD version will feature the 400-minute miniseries on 3 discs in an anamorphic widescreen presentation with Dolby Digital 5.1 audio. In addition, the release will include the The Making of Pillars of the Earth as well as a Visual Effects Progression and a Main Titles Progression.

The Blu-Ray Disc version with its 1080p high definition transfer and DTS 5.1 HD Master Audio track will include the same bonus materials as the DVD version.