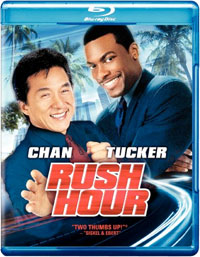 New Line Home Video and Warner Home Video have prepped and scheduled a release of Rush Hour and will finally bring this action comedy to Blu-Ray in December.

“Ain’t never gonna have no partner, ” LAPD Det. James Carter insists. He gets a partner. And since that partner is played by dynamic martial arts legend Jackie Chan and motor-mouthed Carter is played by wisecracking Chris Tucker, Rush Hour zooms along with gleeful chemistry under the dynamic directorial hand of Brett Ratner. The case: rescue the kidnapped daughter of a visiting Hong Kong official. The result: amazing stunts (Chan does his own) and verbal wit (well, Tucker does his own, too!) that delivered a kick to the buddy-cop genre – and gave Chan his long-awaited, mainstream-U.S. breakthrough.

Featuring a 1080p high definition transfer with high def audio, the release will also contain a Commentary Track by Director Brett Ratner, along with Additional Scenes.

Further, the Featurette Gallery ”A Piece of the Action” will be included on the disc, as well as Brett Ratner’s Short Film ”What Ever Happened to Mason Reese?”.

Also look for the Music Videos by Dru Hill and Heavy D & the Boyz’s on the release, together with the movie’s Theatrical Trailer.