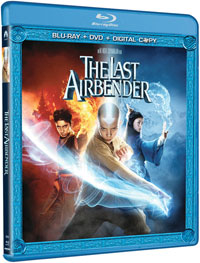 Night Shyamalan’s live action version of The Last Airbender will arrive on DVD and Blu-Ray Disc this fall from Paramount Home Entertainment .

Experience the thrilling live-action adventure based on the hit Nickelodeon series Avatar: The Last Airbender. Join Aang, an extraordinary boy with incredible “bending” powers, as he journeys through an exotic land filled with magical creatures and powerful friends. As the Avatar, he is the only one who can end the age-old conflict between the four nations, Air, Water, Earth and Fire.

The DVD version features an anamorphic widescreen transfer with Dolby Digital 5.1 audio and will include Deleted Scenes and Outtakes, as well as the Featurette ”Origins of the Avatar”.

The Blu-Ray version will feature a 1080p high definition transfer, complemented by a DTS 5.1 HD Master audio track. In addition to the features mentioned above, the release will also include a Trivia Track as well as the 9-part Documentary ” Discovering The Last Airbender” that covers Inspirations, Heroes, Greenland, World, Action, Effects, Music and the Finale.
o   Siege of the North (HD) – Get transported to the frozen realm of the Northern Water Tribe and the largest indoor film set ever built on the U.S. east coast
o   Origins of the Avatar (HD) – Birth of the mythology from the original co-creators of the animated show, Mike DiMartino and Bryan Bryan Konietzko.  Concept art from the popular series provides further perspective into how the story would eventually reincarnate into an epic feature film with insightful behind-the-scenes looks and interviews. Also included is Katara for a Day where you will spend a day on the set with Nicola Peltz.