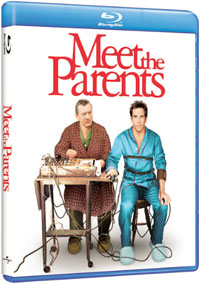 Universal Home Entertainment has added Meet The Parents and its sequel, Meet The Fockers to their release line-up, bringing both films to Blu-Ray Disc in late November.

In Meet The Parents male nurse Greg Focker (Ben Stiller) is all set to propose to his girlfriend, Pam (Teri Polo), during a weekend at her parents“ home. But there’s a catch: Jack Byrnes (Robert De Niro), Pam’s intimidating, cat-loving, ex-CIA father, takes an immediate dislike to his daughter’s truth-bending beau. Soon, a hilarious string of outrageous mishaps turns Greg into master of relative disaster.

Among the extras on the release you will find a Commentary with Cast Members Robert De Niro, Ben Stiller, Director Jay Roach and Producer Jane Rosenthal, as well as a Commentary Track with Director Jay Roach and Editor Jon Poll. Further, The Featurettes ”Spotlight on Location,” “De Niro Unplugged,” “The Truth About Lying,” “Silly Cat Tricks” and ”Jay Roach: A Director’s Profile” will be included on the disc.

Featuring a 1080p high def transfer with DTS 5.1 HD Master Audio, the release will also contain Bloopers, as well as the Featurettes ”Inside The Litter Box,” “The Manary Gland,” “Fockers” Family Portrait,” “The Adventures Of A Baby Wrangler” and ”Matt Lauer Meets The Fockers”. In addition, the disc will contain a Commentary Track with Director Jay Roach and Editor/Co-Producer Jon Poll.