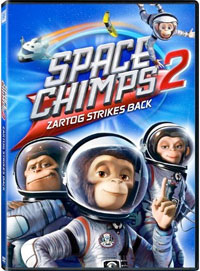 Space Chimps 2: Zartog Strikes Back has been added to 20th Century Fox Home Entertainment’s schedule as the studio will bring the film to DVD only in early October.

The film follows Comet, who is usually left at mission control, but longs to venture into space like his chimp-colleagues. Comet gets the chance to travel to Planet Malgor where he meets Kilowatt, the once shy alien, and lives out his ultimate fantasy of exploring outer space. However, when the feared alien ruler Zartog takes over Mission Control, Comet must prove that he is brave enough to take him on. Challenged to show that he has the right skills, Comet must join fellow chimps Ham, Luna and Titan to save the day.