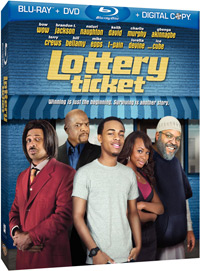 Warner Home Video has just added Lottery Ticket to their list of releases, scheduling to bring this comedy to DVD and Blu-Ray Disc this fall.

Kevin Carson (Bow Wow), a young man living in the projects, is just an ordinary guy… until he wins $370 million in the Mondo Millions Lottery. That’s the good news.

The bad news is, the lottery claim office is closed for the long Fourth of July weekend, so, before he can collect his prize, Kevin is going to have to figure out how to keep a lid on his good fortune and survive the next three days.

Arriving on DVD and Blu-Ray Disc, no bonus materials and specs for the title have been announced yet, but expect to see this comedy in stores on November 16 for $28.98 on DVD and $35.99 as a Blu-Ray/DVD and Digital Copy combo.