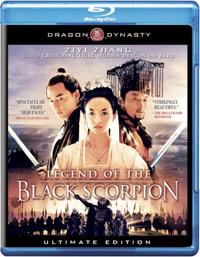 Under their Dragon Dynasty label, Genius Products will release the martial arts flick Legend Of The Black Scorpion on Blu-Ray Disc this fall.

Now arriving on Blu-Ray with a 1080p high definition transfer and DTS 5.1 HD Master Audio, “Legend Of The Black Scorpion” will also include all of the bonus materials found on the previously released DVD version. Therefore, look for the Commentary Track by Hong Kong Cinema Expert Bey Logan, along with the Interview Featurette ”Master Of Ceremonies”, featuring Director Feng Xiaogang, as well as the Interview Featurette ”Warrior Prince” featuring actor Daniel Wu. The Making Of Legend Of The Black Scorpion will also be included, a well as the Behind-the-scenes Featurette ”A Dynasty Uncovered” and a Trailer Gallery.

“Legend Of The Black Scorpion” will arrive in high definition on October 26 for $19.98.