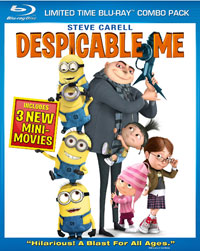 Universal Home Entertainment has just added the animated movie Despicable Me to their line-up, bringing the film to DVD and Blu-Ray Disc in December.

In a happy suburban neighborhood surrounded by white picket fences with flowering rose bushes, sits a black house with a dead lawn.  Unbeknownst to the neighbors, hidden deep beneath this home is a vast secret hideout.  Surrounded by an army of tireless, little yellow Minions, we discover Gru (Steve Carell), planning the biggest heist in the history of the world. He is going to steal the moon. Yes, the moon!

Gru delights in all things wicked.  Armed with his arsenal of shrink rays, freeze rays and battle-ready vehicles for land and air, he vanquishes all who stand in his way.  Until the day he encounters the immense will of three little orphaned girls who look at him and see something that no one else has ever seen: a potential Dad.

One of the world’s greatest super-villains has just met his greatest challenge: three little girls named Margo, Edith and Agnes.

The DVD version of the movie will feature an anamorphic widescreen transfer with Dolby Digital audio. The release will contain a Commentary Track with directors Chris Renaud and Pierre Coffin, featuring the Minions!. Also included are the Featurettes ”The World of Despicable Me,” “Despicable Beats,” in which director Chris Renaud talks about the cool factor of renowned music producer Pharrell Williams, and ”A Global Effort”, in which you can learn all about the global effort behind Despicable Me. A director from France and another from the USA, plus an American and English cast created a movie in France, with artists from all over the world for a truly international movie!

”Gru’s Rocket Builder” is an all-new game included on the disc, in which Vector has stolen some of the most famous landmarks from around the world and replaced them with the pieces to Gru’s rocket. Players must return all the stolen landmarks to the correct countries in order to build their own rockets before Vector hacks into the system and steals the rocket plans. The reward for completing the rocket is a launch to the moon!

A 2-disc DVD version will also be available for a limited time, offering even more bonus materials, such as Three All-new Mini-Movies starring the Minions. Get more laughs and more minion mayhem with “Home Makeover”, “Orientation Day” and “Banana” – you’ll want to watch them again and again!. Further you will find The Voices of Despicable Me on the disc, inviting you to go behind-the-scenes with Steve Carell, Jason Segel, Russell Brand, Miranda Cosgrove, Kristen Wiig and Julie Andrews as they give life to their animated characters. Includes character profiles for each of the cast members!  Super Silly Fun Land gives you the opportunity to join Agnes, Margo and Edith at the Super Silly Fun Land Theme Park and play Feed the Creatures and Freeze the Floating Minions to win super cool prizes.

On Blu-Ray Disc the movie will be presented in a 1080p high definition with a DTS 5.1 HD Master Audio track. The release will be available in a 3D version as well as a traditional 2D presentation. Both versions are identical in features and will include all the bonus materials from the DVD and 2-disc DVD version. Additionally, it will include a Picture-in-picture Video Commentary and Miss Hattie’s Top Secret Cookie Recipes in which Margo is proud to present the recipes for those wonderful cookies that the lovable orphans under Miss Hattie’s care enjoy so much!

The release will be rounded out by a number of BDLive features and gimmicks, such as the iPhone and iPad apps Minion Me and Minion Dominion, as well as pocketBlu.

A Digital Copy of the movie is also included.