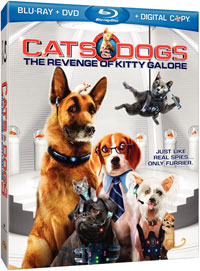 Warner Home Video has included Cats & Dogs 2: The Revenge Of Kitty Galore to their release line-up, bringing the movie to DVD and Blu-Ray Disc in November.

In the eternal battle between cats and dogs, one crazed feline has taken things a paw too far. Former elite agent Kitty Galore has gone rogue and plans to unleash a diabolical device designed to not only bring her canine enemies to heel but also to take down her former kitty comrades and make the world her scratching post. Faced with this dire threat, cats and dogs must work together for the first time ever to save themselves and their beloved humans from global cat-astrophe. This fantastically fun adventure features the voice talent of Christina Applegate, Michael Clarke Duncan, Neil Patrick Harris, Sean Hayes, James Marsden, Bette Midler and Nick Nolte and stars Chris O’Donnell and Jack McBrayer.

Featuring an anamorphic widescreen transfer with Dolby Digital audio, the DVD version will include the new Looney Toons Short “Coyote Falls”, as well as a Sneak Peek of the All-New Yogi Bear Theatrical Film.

The Blu-Ray version features a 1080p high definition transfer with DTS 5.1 HD Master Audio. It will also contain the Looney Toon Short ”“Coyote Falls” and the Yogi Bear Sneak Peek but will, in addition, also contain the Featurettes ”Dog Dishing: Tails from the Bark Side of Hollywood,” “The Best of the Best Cat vs Dog Animated Showdowns” and Meow-Takes: Outtakes and Gag Reel.