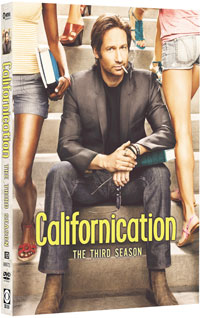 Paramount Home Entertainment and Showtime Home entertainment have added the third season of the CBS TV series Californication to their release line-up, bringing the next installment of the show to DVD this November.

Sophisticated and unique, this comedy centers on novelist Hank Moody (David Duchovny) who struggles to raise his 13-year-old daughter, while still carrying a torch for his ex-girlfriend. His obsession with truth-telling and self destructive behavior — drinks drugs and relationships — are both destroying and enriching to his career.

The release will feature all season three episodes with Dolby Digital 5.1 audio. No extras will be included in the release.

“Californication: Season Three” will be in stores on November 9 for $42.99.