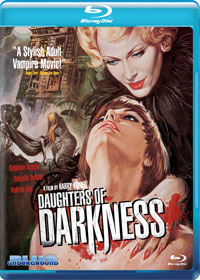 Blue Underground has just unveiled details about the upcoming release of the cult horror film Daughters Of Darkness on Blu-Ray Disc this winter.

International screen icon Delphine Seyrig (of Last Year At Marienbad fame) stars as Elizabeth Bathory, an ageless Countess with a beautiful young “companion” (Goth goddess Andrea Rau) and a legendary legacy of perversion. But when the two women seduce a troubled newlywed couple (French beauty Danielle Ouimet and John Karlen of Dark Shadows and Cagney & Lacey), they unleash a frenzy of sudden violence and depraved desire that shocked both art house audiences and grindhouse crowds worldwide.

Co-written and directed by Harry Kümel, “Daughters Of Darkness” remains one of the most exquisitely mesmerizing adult horror films ever made, that is now coming to Blu-Ray Disc in its uncensored Director’s Cut.

Featuring a 1080p high definition transfer, the movie will be accompanied by a DTS mono audio track as well as Two Commentary Tracks. The first one features Co-Writer/Director Harry Kümel, while the second one features actor John Karlen and journalist David Del Valle. You will also find Locations of Darkness on the disc, containing Interviews with Co-Writer/Director Harry Kümel and Co-Writer/Co-Producer Pierre Drouot. In addition, the release will include Playing the Victim, an interview featurette with the film’s star Star Danielle Ouimet, as well as Daughter of Darkness, another interview featurette, this time with actress Andrea Rau. The movie’s Theatrical Trailer and Radio Spots will round out the disc.

“Daughters of Darkness” will rise again on December 21 and can be yours to own for $29.98.