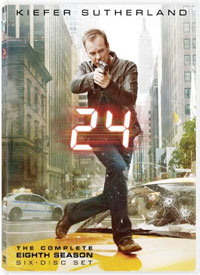 To make sure you have something to watch over the holidays, 20th Century Fox Home Entertainment has just added a DVD and Blu-Ray Disc set of 24: Season Eight to their December line-up.

Hang on for the adrenaline rush of a lifetime as Jack Bauer (Keifer Sutherland) unveils darker secrets, faces deadlier conspiracies, and is thrust into more extreme action than ever before in Season Eight of “24!” As Day Eight unfolds, Bauer races against the clock to prevent the assassination of a Middle Eastern leader on a vital peace-making mission. Meanwhile, a deadly terrorist threat against New York City intensifies and builds towards an explosive climax. Relive the electrifying final season of TV’s most groundbreaking series ever, including a must-see ending!