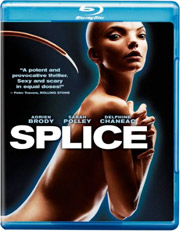 Warner Home Video has put Splice on their release list, scheduling the film to appear on DVD and Blu-Ray Disc in October.

Superstar genetic engineers Clive (Adrien Brody) and Elsa (Sarah Polley) specialize in splicing DNA from different animals to create incredible new hybrid that could revolutionize science and medicine. But when the pharmaceutical company that funds their research forbids it, they secretively take their experiment underground – risking their careers to push the boundaries of science and serve their own curiosity and ambition. The result is Dren, who exceeds their wildest dreams – and threatens to become their worst nightmare.

The DVD version will feature an anamorphic widescreen transfer with Dolby Digital 5.1 audio. As extras, the release contains a series of Featurettes, such as “A Director’s Playground” showing Vincenzo Natali on the movie set, and a look at how the filmmakers explore new motivating territory.

The Blu-Ray version will feature a 1080p high definition transfer with DTS 5.1 HD Master Audio and will include the same bonus materials.