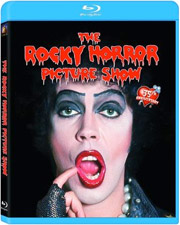 Fans of the cult movie The Rocky Horror Picture Show will be thrilled to hear that 20th Century Fox Home Entertainment has a Blu-Ray Disc version of the movie in the making, bringing it to home video in October.

A divine film adaptation from Richard O’Brien’s British musical horror comedy/rock opera, produced by Lou Adler and Michael White, The Rocky Horror Picture Show features revered performance by Tim Curry (Clue, Home Alone) as a bizarre and self-proclaimed “sweet transvestite from Transsexual, Transylvania,” and Susan Sarandon (Dead Man Walking, Thelma and Louise) and Barry Bostwick (“Spin City”), as Brad and Janet, a couple who find themselves lost on a cold, rainy night. The madcap, musical mayhem begins when the couple takes refuge in the castle of Dr. Frank-N-Furter as he is about to unveil his greatest creation – and have a bit of fun with his reluctant guests.

The Blu-Ray version will feature a 1080p high definition transfer, struck from the original camera negative, and will come with a 7.1 DTS HD Master Audio track. Filled with extras, the release will also include an Audio Commentary by Richard O’Brien and Patricia Quinn, along with Deleted Musical Scenes and Outtakes and the Alternate Credit Ending and Misprint Ending.

A BD Live: Live Lookup, powered by IMDb will also be included, along with Rocky-oke: Sing It!. A Featurette about photographer Mick Rock will also be part of the disc, along with Mick Rock’s Picture Show Gallery.

Further, look for the Pressbook and Poster Gallery.

The release will be rounded out by the Rocky Horror Double Feature Video Show at the Beacon Theater, New York City and the “Time Warp” Music Video.