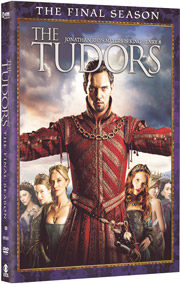 Paramount Home Entertainment has added The Tudors: The Final Season to their release line-up, scheduling the DVD set for release in October.

The Tudors presents the rarely dramatized, tumultuous early years of King Henry VIII’s nearly 40 year, omnipotent reign (1509-1547). In addition to his famous female consorts and 20+ year marriage to Catherine of Aragon to the infamous dalliance with Anne Boleyn, the series delves in to Henry’s most notable political relationship and the deconstruction of the Roman Catholic Church in England.

Arriving as a 3-disc DVD set, the release will feature all of the season’s episodes with Dolby Digital 5.1 audio. As extras you will promotional materials for other TV shows on the release, such as two episodes from the show “United States of Tara,” “Edridge Tech” and a sneak peek at “The Borgois.”