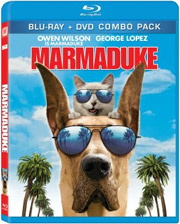 20th Century Fox Home Entertainment has just added the family movie Marmaduke to their release line-up, bringing the movie to DVD and Blu-Ray Disc by the end of August.

When Marmaduke (Owen Wilson) moves to a new neighborhood with his family, the super-sized teenage dog soon discovers he just doesn‘t fit in””literally! Marmaduke can‘t help being a one-dog wrecking crew, causing fur-flying chaos wherever he roams. But, with the help of his friend, Carlos the Cat (George Lopez), Marmaduke may just get out of the doghouse, fall in love, and surf off into the sunset.

The DVD version will feature a widescreen version of the movie with Dolby Digital 5.1 audio. In addition it will include Deleted Scenes and the Featurettes ”Cowabarka! Surfing Dogs” and ”Canine Casting”.

The Blu-Ray version will feature a 1080p high definition transfer and come with a DTS 5.1 HD Master Audio track. It will include the same extras as the DVD version but will, in addition, contain a Gag Reel and Puppy Marmaduke and Kitty Carlos: Home Movies. On a second disc, this version will also offer up the DVD version of the movie.