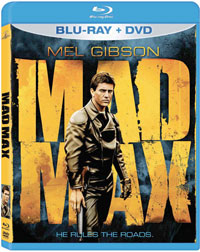 In the ravaged near future, a savage motorcycle gang rules the road. Terrorizing innocent civilians while tearing up the streets, the ruthless gang laughs in the face of a police force hell-bent on stopping them. But they underestimate one officer: Max Rockatansky (Gibson). And when the bikers brutalize Max’s best friend and family, they send him into a mad frenzy that leaves him seeking revenge, which is the only thing left in the world for Max to live for.

The movie will arrive as a standard Blu-Ray Disc version, featuring the movie in a 1080p high definition transfer with a DTS 5.1 HD Master Audio track. Arriving on a single disc, he release will also include a Filmmaker Commentary by Jon Dowding, David Eggby, Chris Murray and Tim Ridge, as well as the Documentary ”Mad Max: The Film Phenomenon”.

For the first time, the release will also include the Original Australian Language Track. Two Theatrical Trailers and the movie’s TV Spots will round out the disc.

In addition, the movie will be available as a Blu-Ray Disc/DVD Combo. The Blu-Ray version will be identical to the aforementioned version. A second disc, featuring the DVD version, will also be included, adding additional bonus materials, including the Documentaries “Mel Gibson: The Birth Of A Star” and “Mad Max: The Film Phenomenon”. This DVD version will also include the Original Australian Language Track, a series of Trailers and a Trivia & Fun Fact Track, along with a Photo Galleryand TV Spots.