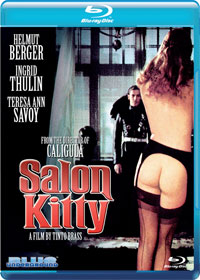 Blue Underground has just announced the Uncensored Director’s Cut of Tinto Bass’ Salon Kitty to be released on Blu-Ray Disc this winter.

Berlin, 1939: At the dawn of World War II, power-mad SS Officer Wallenberg (Helmut Berger) is ordered to find and train Germany’s most beautiful women to work in the opulent brothel of Madam Kitty (Ingrid Thulin). Here these Nazi nymphs will submit to the bizarre passions and carnal degradations of the Reich’s highest-ranking men and women while Wallenberg secretly records their acts for blackmail. But when an innocent young prostitute (Teresa Ann Savoy) uncovers the conspiracy, her revenge will ignite a holocaust of pain, pleasure and shocking sexual perversion. The story is true. The depravity is real. The film is Salon Kitty.

This Blu-Ray version features a 1080p high definition transfer, accompanied by the movie’s original Italian audio track in mono, as well as an English dub. Among the bonus materials on this disc you will find Inside Salon Kitty, an interview with Director Tinto Brass, as well as Designing Salon Kitty, an interview with Production Designer Ken Adam.