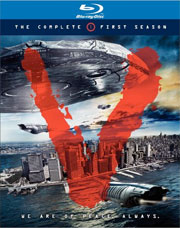 Warner Home Video has added V: The Complete First Season, the re-imagining of the original 1980s TV series, to DVD and Blu-Ray Disc this fall.

They arriVe. Earth’s first alien encounter begins when huge motherships appear over 29 major cities. The visitors – the Vs – are human-like beings who know our languages and bring awesome gifts of healing and technology. People everywhere welcome them as saviors. But a fledgling resistance is on the rise, determined to reveal the shocking truth. Among the underground cadre: an FBI Counter Terrorism Agent who uncovers a terror cell no one ever expected…and finds that her teenage son is drawn to the beauty and promise of the Vs. Get in the know with the amazing first season of the series that combines sci-fi thrills with the uncertainties of the post-9/11 world. Here. Now. AdVenture begins.

The release will include fullframe presentations of the show, along with 5.1 audio tracks. As extras you will find the Featurettes”The Visual FX of V,” “The Actor’s Journey” and ”An Alien in Human Skin: The Makeup FX of V” on the release, along with a Commentary Trackwith Executive Producers Scott Rosenbaum and Steve Pearlman. Also included are Bloopers and Deleted Scenes.