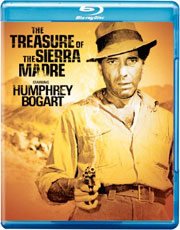 Warner Home Video celebrates some more Humphrey Bogart by bringing The Treasure of the Sierra Madre to Blu-Ray Disc for the first time in October.

Gold in the hills, avarice in the hearts of men. Two hard-luck drifters (Humphrey Bogart and Tim Holt) and a grizzled prospector (Walter Huston) discover gold. Then greed and paranoia set in. Shot in Mexico, “The Treasure of the Sierra Madre” was at that time considered a rather expensive production. John Huston won the 1948 Academy Award® for his Directing and Writing and his father (Walter Houston) took the Best Actor in a Supporting Role Academy Award®. Without awards, but with enduring acclaim, is Bogart’s performance, transforming from a likable hobo to a heartless thug simmering in greed. Treasure of the Sierra Madre’s place on the American Film Institute’s “Top 100 American Films” list reaffirms it’s still a powerful movie.

The release will feature a Commentary Track by Bogart Biographer Eric Lax, as well as the Featurette ”Discovering Treasure: The Story of The Treasure of the Sierra Madre”.

The Feature-Length Documentary Profile John Huston will also be included along with Outtakes and the Classic Cartoon: 8 Ball Bunny.

To recreate the Warner Night at the Movies, you will also find the original Newsreel, the Joe McDoakes Comedy Short “So You Want to Be a Detective”, the Classic Cartoon “Hot Cross Bunny” and Trailers for “The Treasure of the Sierra Madre” and 1948’s “Key Largo” on the disc.

As another bonus, the release will include the Radio Show Adaptation featuring the Movie’s Original Stars.

“The Treasure of the Sierra Madre” will arrive in high definition on October 5 for $24.95.