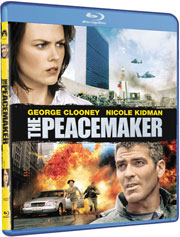 When a train carrying atomic warheads mysteriously crashes in the former Soviet Union, U.S. nuclear specialist Dr. Julia Kelly discovers that the accident is really part of a diabolical plot to cover up the theft of the weapons. In a race against time, crack special forces Colonel Thomas Devoe and Dr. Kelly team up, putting aside their personal differences as they track the last remaining warhead to the steps of the United Nations in this taut apocalyptic thriller from director Mimi Leder.

The release features a 1080p high definition transfer, complemented by a DTS 5.1 HD Master Audio track. As extras, you will find Stunt Footage on the disc, along with From the Cutting Room Floor… deleted scenes, and the movie’s Theatrical Trailer in high definition.