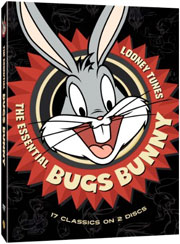 Arriving on two DVD discs, the release will include 20 Looney Tunes classics along with a number of bonus materials. “The Essential Bugs Bunny Collection” is a comprehensive compilation that features some of the best of Bugs Bunny’s body of work.  It consists of theatrical shorts, television episodes and specials. The shorts “How Bugs Bunny Won The West,” “Bugs Bunny’s Wild World Of Sports” and “Hare and Loathing In Las Vegas” are new to DVD and presented here for the first time.

As extras you will find “Ain’t I a Stinker” on the release, a new Featurette that details Bugs Bunny’s vast career, along with Invasion of the Bunny Snatchers, available for the first time in its original uncut form, this 1990 short was originally released on the Space Jam DVD in a cut version.

Also included is the Emmy nominated TV Special “Bug’s Bunny Bustin’ Out All Over” and “The Carnival of the Animals,” the 1976 television special set against an orchestral backdrop which was directed by Chuck Jones.

“The Essential Bugs Bunny Collection” arriveson DVD on October 12 for $26.99.