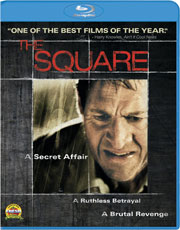 Sony Pictures Home Entertainment has added the thriller The Square for release on DVD and Blu-Ray Disc in August.

A stylish, twist-filled film noir, “The Square” centers on an adulterous couple whose scheming leads to arson, blackmail and murder. Escaping the monotony of a loveless marriage, Raymond Yale becomes entangled in an affair with the beautiful and troubled Carla. Ray’s moral limits are tested when Carla presents him with the proceeds of her controlling husband’s latest crime. This is their chance: Take the money and run… If only it were that simple. The seed is planted and Ray, fearing he will lose his love, engineers the plan. Hiring the professional arsonist Billy becomes a fatal error, and the plan goes horribly wrong. Alarm bells sound and suspicions are raised but, miraculously, the dust looks to settle. After all… Nobody knows. Then the first blackmail note arrives.

As extras the DVD version will contain the Featurette ”Inside The Square”, as well as Pre-Visualisation and Visual Effects features. Also included are Deleted Scenes, the Short Film “Spider” and the “Sand” Music Video by Jessica Chapnik.

The Blu-Ray version with its 1080p high definition transfer and DTS 5.1 HD Master Audio will feature the same bonus materials.