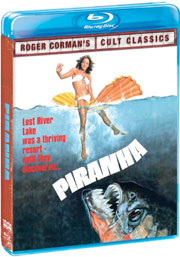 this tongue-in-cheek thriller stars Bradford Dillman (doing his best Rip Torn impression) as an antisocial mountain man and Heather Menzies as a rookie detective who race a school of mutant piranha downriver. Dante and Sayles provide the requisite blood and gore for this drive-in meat market: a kids’ summer camp and a waterfront amusement park await the little beasties. Along the way, riverside retiree Keenan Wynn gets his ankles stripped clean, camp counselor Paul Bartel is chomped on the cheek by a hungry little bugger who takes to the air, and hordes of unlucky bathers are caught in the center of a feeding frenzy.

The release will include a good-humored Commentary Track by director Joe Dante and producer Jon Davison, who also narrate the 10 minutes of good-quality home-movie footage shot by Davison. Further you will find six minutes of Outtakes and bloopers on the release.

Also look for “The Making Of Piranha” Featurette with New Interviews from Roger Corman, Joe Dante, Dick Miller, Belinda Balaski and Many More.

Included also is the Piranha Trailer with Commentary by Producer Jon Davison – Courtesy of “Trailers From Hell”, as well as a Stills Gallery with Photos and Posters from Around the World.

A Behind-the-Scenes Stills Gallery featuring photos from Phil Tippett’s Personal Collection is also part of the release, along with Addition Scenes from the Network Television Version.

The release will be rounded out by Radio and TV Spots and the New World Trailers for the film.