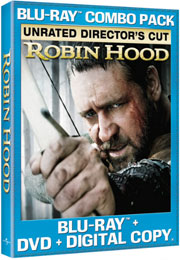 Ridley Scott’s Robin Hood has been slated by Universal Home Entertainment for release on DVD and Blu-Ray Disc this fall.

Academy Award® winner Russell Crowe and visionary director Ridley Scott (Gladiator) reunite for the untold story of the man behind the legend. In an age of oppression and shameless tyranny, an outlaw becomes the unlikely hero that saves a nation and inspires generations to fight for freedom.

The release will arrive in a variety of versions, including single-disc DVDs featuring the Theatrical and the Uncut Version respectively. 2-disc Special Edition versions of each cut will also be available.

As extras these Special Editions will include Deleted Scenes with Introduction & Commentary by Editor Pietro Scalia, as well as the Featurette ”Rise and Rise Again: Making Ridley Scott’s Robin Hood” as well as The Art of Nottingham. Further a Marketing Archive will be included and a Digital Copy of the movie.

The Blu-Ray version will include a 1080p high definition transfer with DTS 5.1 HD Master Audio as well as the same bonus materials as the DVD Special Edition. In addition it will include the DVD version as well as BD Live features.