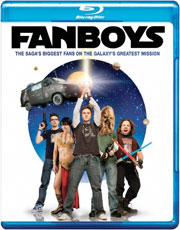 The Weinstein Company has added a Blu-Ray version of the 2008 comedy Fanboys to their July release line-up.

In 1998, four childhood buddies with a shared love of all things Star Wars reunite for one final, hilarious odyssey. Their insane plan: a cross-country road trip to storm George Lucas’ Skywalker Ranch and steal a copy of Episode I before it’s released. With the police, a crew of angry Trekkies, and a crazy pimp hot on their trail, what could possibly go wrong?

The release features a 1080p high definition transfer and will come with a 5.1 Dolby Digital TrueHD audio tack. As extras, the release contains an Introductionby Director Kyle Newman and Producer Matthew Perniciaro, as well as a Commentary Track by Cast And Crew members.

Also included are Deleted Scenes and a series of Featurettes with titles suc has ”The Truth About Fanboys,” “Star Wars Parallel,” “4 Fanboys & 1 Fangirl” and “The Choreography.” The Webisodes “Disturbances In The Force are also included.