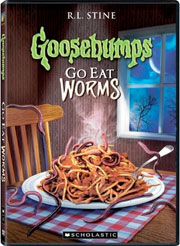 20th Century Fox Home Entertainment will be releasing a number of additional movies in the Goosebumps series in time for Halloween this year.

Among the titles the studio has slated for release are Go Eat Worms! and The Blob That Ate Everyone. Like the previous releases in the series, these DVDs will feature fullframe transfers with Dolby Stereo audio tracks. As the other releases, they will also be without any notable bonus materials.