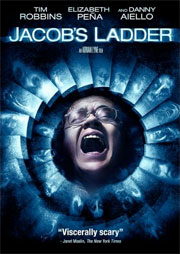 Lionsgate Home Entertainment has added the horror trip Jacob’s Ladder to their Blu-Ray line-up, scheduling the film for release in September.

The most frightening thing about Jacob Singer’s nightmare is that he isn’t dreaming. Vietnam veteran Jacob Singer (Robbins) is tormented by the vivid memories of war and the heartbreaking death of his son. Demonic visions and hallucinations begin to haunt him day and night, leaving Jacob disturbed and searching for answers. Unsure if he is suffering from post-traumatic stress, dementia, or something paranormal, Jacob finds himself quickly spiraling out of control in this taut psychological thriller.

The release will feature a 1080p high definition transfer with DTS 5.1 HD Master Audio. Among the extras you will find a Commentary Track with director Adrian Lynne, as well as Deleted Scenes and a Making-of Featurette along with the movie’s Theatrical Trailer.