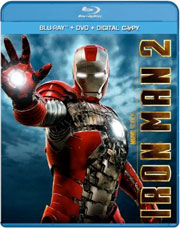 Paramount Home Entertainment has just announced details about the upcoming release of Iron Man 2 on DVD and Blu-Ray Disc later this year.

On DVD, the film will be available as a single-disc version with only a Commentary Track as a buns feature. Alternatively, there will a 2-disc Special Edition DVD, featuring the movie with the commentary track, as well as fourDeleted Scenes with optional commentary. Also included are two Featurettes, titled ”Creating Stark Expo” and ”Practical Meets Digital”. The AC/DC Music Video for “Shoot To Thrill” will also be included, along with a Digital Copy of the film.

The Blu-Ray version will feature a 1080p high definition transfer with DTS 5.1 HD Master Audio track. Arriving on 3 discs, the release will also contain the Commentary Track with Jon Favreau, plus the S.H.I.E.L.D. Data Vault in high def, allowing you to extend your knowledge of the Marvel Cinematic Universe with high-level clearance into S.H.I.E.L.D.’s digital data vault. Interact with select scenes from the movie that include new layers of graphics and insider information. View case files, dossiers, S.H.I.E.L.D. training films, tech details and more.

Further there will be a look at the Previsualization and Animatics and the Multi-part Documentary ”Ultimate Iron Man: The Making of Iron Man 2”, consisting of ”Rebuilding the Suit”, an all-encompassing look at the beginning stages of this mammoth blockbuster, ”A Return to Action”, taking you from Marvel Studios to the streets of Monaco through the trials and triumphs of continuing Iron Man’s story, ”Expanding the Universe”, from the amazing sets of Stark Expo to Tony Stark’s home and beyond, the Marvel Universe continues to unfold into new and exciting places, and ”Building a Legacy”, taking a look at the filming to editing, scoring and visual effects, Favreau and his team face the challenges of bringing the sequel to the big screen.