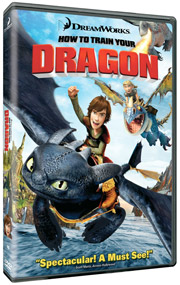 “How To Train Your Dragon” is an adventure comedy set in the mythical world of burly Vikings and wild dragons. The story centers around a scrawny teenager, Hiccup, who lives on the island of Berk, where fighting dragons is a way of life. Initiation is coming, and this is his one chance to prove his worthiness to his tribe and father. But when Hiccup encounters, and ultimately befriends, an injured Night Fury dragon, his world is turned upside down and what started out as Hiccup’s one shot to prove himself turns into an opportunity to set a new course for the future of the entire tribe.

The DVD version of the movie will feature a widescreen presentation of the film with Dolby Digital 5.1 audio. As bonus materials,you will find a Commentary Track by the filmmakers on the disc, as well as Cast Interviews called ”Viking Sized Cast”. Further, look for the Featurette ”Tech of Dragon” and the movie’s Trailers.

The standard Blu-Ray version will arrive in 1080p high definition with 5.1 Dolby TrueHD audio support. The release will include all the extras from the DVD version but will contain an additional Featurette called ”Animators’ Corner” and a Trivia Track.

Also coming is a Blu-Ray/DVD Special Edition, featuring the movie in both formats, complete with all the aforementioned extras, as well as even more supplements, including Deleted Scenes and even more Featurettes, such as ”The Way We See it,” “Meet Cressida Cowell,” “Going for the Gold,” “How to Draw a Dragon” and ”Dragon Training Final Exam”. A selection of Music Videos will also be part of this release.