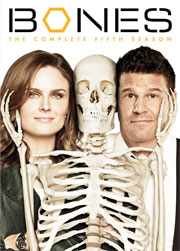 Dr. Temperance Brennan (Emily Deschanel) and Special Agent Seeley Booth (David Boreanaz) are back for more mystery, murder, and mayhem in Season Five of Bones. Relying on Brennan’s unparalleled scientific abilities and Booth’s street-wise instincts, the sexy, crime-solving duo and their team face everything from modern-day witches to murdered rock-n-rollers as they scramble for evidence to stop a gruesome serial killer. This spectacular new season brings a wedding, the show’s landmark 100th episode, and decisions Bones and Booth must make that could change their lives…forever!

No specs or feature information has been announced yet.