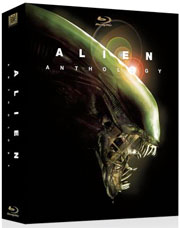 The “Alien Anthology” is a truly unique home entertainment experience. For the first time ever, the studio has united the material from every home video release of the Alien saga including the 1991/1992 laserdisc releases, the 1999 “Legacy” release and 2003’s groundbreaking “Alien Quadrilogy” release into one complete Blu-ray collection. The set also includes two versions of each film and over four hours of previously unreleased exclusive material such as original screentests of Sigourney Weaver prior to filming the original ALIEN, unseen deleted scenes, thousands of still photographs from the Fox archives, the previously unseen original cut of “Wreckage and Rage: The Making of ALIEN3,” and much, much more.

The 6-disc Blu-Ray set will present the movies in 1080p high definition transfers in their original widescreen aspect ratios, complemented by DTS 5.1 HD Master Audio tracks. The list of bonus materials is virtually endless, containing every possible piece of supplement you could possibly think of.