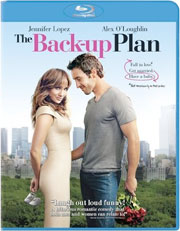 Sony Pictures Home Entertainment has added the romantic comedy The Back-up Plan to their release line-up, bringing the film to DVD and Blu-Ray Disc in late August.

Jennifer Lopez stars as Zoe, a single New Yorker who dreams about meeting Mr. Right, having a baby and living happily ever after. But after a string of Mr. Wrongs, Zoe commits to her back-up plan: to take on motherhood alone. Zoe’s plan proves far from foolproof when moments after her procedure she’s swept up into a whirlwind romance with Stan (Alex O’Loughlin), the man of her dreams. Can Zoe hide her pregnancy until Stan is ready for the truth? Or will the truth send him packing?

The DVD version arrives in anamorphic widescreen with a dolby Digital 5.1 audio track. As extras the DVD will also contain Deleted Scenes and a Making-Of Featurette with the title ”Belly Laughs”.

The Blu-Ray version will arrive in a 1080p high definition presentation with DTS 5.1 HD Master Audio and the same bonus materials as the DVD. In addition, this release will also include Sony’s movieIQ trivia track feature.