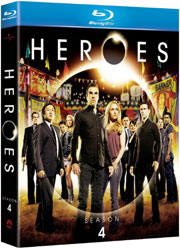 Universal Home Entertainment has added more Heroes to their line-up, bringing the entire Season 4 to DVD and Blu-Ray Disc in August.

Experience all the intrigue and suspense of Heroes: Season 4 in this 4-disc set that includes all 18 gripping episodes from the fourth season’s volume, Redemption. As the Heroes mourn fallen friends and face dangerous new foes, prepare for a wild ride — filled with shocking twists and turns — through an ominous funhouse that culminates in a Brave New World. Then step right up and explore hours of exclusive, behind-the-curtain magic with the show’s writers, stars and artists.

Arriving as a 5-disc DVD set, the release will include a widescreen version of the series with Dolby Digital 5.1 audio. As extras you will find Deleted Scenes and a number of Featurettes on the release, as well as the Sullivan Brothers Design Gallery and Commentary Tracks on select episodes.

The 4-disc Blu-Ray set will feature a 1080p high definition transfer of the film, complemented by a DTS 5.1 HD Master audio track. Like the DVD version this version will include Deleted Scenes and a number of Featurettes on the release, as well as the Sullivan Brothers Design Gallery and Commentary Tracks on select episodes.