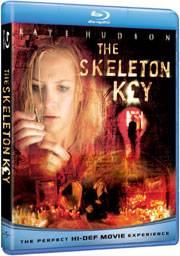 Universal Home Entertainment has added the thriller The Skeleton Key to their line-up, bringing the film to Blu-Ray Disc for the first time in September.

Kate Hudson stars in The Skeleton Key – a supernatural thriller that weaves a tale of terror and suspense! When Caroline Ellis (Hudson) takes a job in Louisiana’s bayous, she unlocks a deadly secret involving magic, conjure and sacrifice that pulls her into a terrifying world of strange, frightening and unexplained incidents. The key to escaping may lie in a decrepit attic, but if she dares to believe in what she discovers, everything she fears will become real!

Featuring a 1080p high definition transfer and a DTS 5.1 HD Master Audio track, the release also contains a Commentary Track by Director Iain Softley, as well as a number of Featurettes, such as ”Kate Hudson’s Ghost Story”, a chilling true story from the actress’s past. Also included is ”Exploring Voodoo / Hoodoo”, a look from magical herbs to spiritual connections, unlock the secrets & history of the bayou, and ”Behind the Locked Door” a featurette that takes you behind the scenes with the cast and crew as they bring an American ghost to life. ”Blues in the Bayou”, which is also included gives you a look at the creation of the sounds, the music and the spirit of New Orleans.

“The Skeleton Key” has been scheduled for release on September 7 for $26.98.