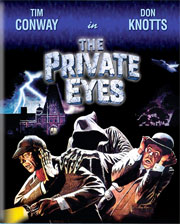 Independent publisher Hens Tooth has announced the 1980 comedy The Private Eyes to be released on DVD and Bl-Ray Disc this fall.

An old dark house…a double murder…a beautiful heiress…a ghoulish staff…a message from the grave…and to sort it all out, two of the most comically inept bunglers ever to give private detection a bad name! Don Knotts and Tim Conway star as Inspector Winship and Doctor Tart in this comedy delight spiced with goosebumps.

When Winship and Tart are engaged to investigate the deaths of Lord and Lady Morley, they find nothing unusual about the fact that their authorization comes directly from the late Lordship himself. Arriving at the Lordship’s manor house, they find nothing odd about the staff either — a bizarre collection of samurai, Nazis, gypsies, busty maids and even a hunchback houseman.

Private Eyes is the perfect vehicle for these two masters of comic timing, who manage to wreak havoc on nearly everything that’s sacred to classic mystery melodrama. It’s a merry chase as they fumble their way to a most unlikely solution!

The release will arrive as a fullframe DVD version, a widescreen DVD version and a Blu-Ray Disc version on September 28 for $29.95 and $34.95, respectively.