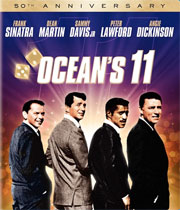 To celebrate the movie’s 50th Anniversary, Warner Home Video has added the original 1960 Ocean’s 11 to their line-up, bringing the film to Blu-Ray in October.

New Year’s Eve in Las Vegas. Roulette wheels spin, cards snap, slots chime, champagne fizzes, the shows go on…and the lights go out. It’s the perfect time to steal a kiss or a $25 chip. But for Danny Ocean (Frank Sinatra) and his 10 partners in crime, it’s the perfect moment to steal millions.