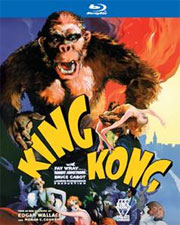 Over the Memorial Day weekend, Warner Home Video has just announced the release of the 1933 RKO classic King Kong to be unleashed n Blu-Ray Disc this fall.

Robert Armstrong stars as movie producer Carl Denham who travels to a mysterious, uncharted island in search of material for his next film. Also aboard are unemployed actress Ann Darrow (Fay Wray) and adventurer Jack Driscoll (Bruce Cabot). Once the crew reaches Skull Island they discover it is home to prehistoric beasts including Kong, a giant ape who becomes obsessed with the crew’s blonde starlet. King Kong teems with memorable moments, from the audience’s first glance at the giant ape to his last stand atop the Empire State Building.

Presented as another one of Warner’s Blu-Ray Books, the release offers up 32 pages of rare photography and trivia, written by Rudy Behlmer, that centers around the vision of director, Merian C. Cooper and his larger than life persona that brought the story of King Kong to the screen.

Other bonus materials included on the release are a Commentary Track by Ray Harryhausen and Ken Ralston, with Merian C. Cooper and Fay Wray, a Merian C. Cooper Movies Trailer Gallery and the 2005 Documentary ”I’m King Kong! The Exploits of Merian C. Cooper”. Further you will find the Multi-part Featurette ”RKO Production 601: The Making of Kong, Eighth Wonder of the World” on the release, covering aspects, such as The Origins of “King Kong”, Willis O’Brien and “Creation”, Cameras Roll on Kong, The Eighth Wonder, A Milestone in Visual Effects, Passion, Sound and Fury, The Mystery of the Lost Spider Pit Sequence and King Kong’s Legacy. In addition the release will contain Creation Test Footage with Commentary by Ray Harryhausen.

“King Kong” will once again fight for the beauty on September 28, this time in high definition for $34.99.