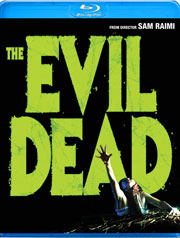 As you may have heard around the web already, Anchor Bay Entertainment will release Sam Raimi’s The Evil Dead on Blu-Ray Disc later this year – on August 31 to be exact.

While final specs are still in the works we have heard great things about Anchor Bay’s plans for this title, and while an official announcement has yet to come forth, we are at least able to give you a first good look at the cover artwork for the release. Enjoy!