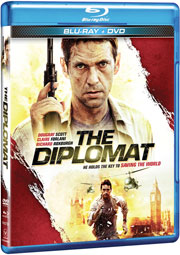 Independent studio RHI Entertainment and Vivendi Home Entertainment have just announced the action-packed thrill-ride The Diplomat to be released as a Blu-Ray/DVD combo in August.

Scotland Yard Commander Julie Hales has discovered that British diplomat Ian Porter has dangerous ties to a notorious Russian trafficker in heroin.  But the stakes are raised when an attempt on Porter’s life leads Hales to a terrifying new discovery: a nuclear bomb previously belonging to the Soviet Union is missing and in the hands of the enemy.  Now, with time running out, a life-and-death race is on to uncover Porter’s true involvement in a global conspiracy and to prevent a nuclear annihilation.

Inspired by real incidents, the story spans the globe from London to Sydney to Tajikistan, taking audiences through an explosive chain of events that will keep them on the edge of their seats until the stunning end. The release will contain a high definition Blu-Ray version as well as a separate DVD disc, though no bonus materials or detailed specs have been announced yet.