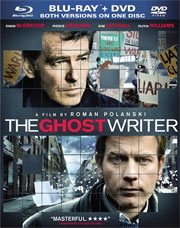 Summit Entertainment has just unveiled details about the upcoming release of Roman Polanski’s The Ghost Writer, bringing the movie to DVD and Blu-Ray Disc in August.

When a gifted ghostwriter (Ewan McGregor) is hired to write the memoirs of former British Prime Minister Adam Lang (Pierce Brosnan), he quickly finds himself trapped in a web of political and sexual intrigue. Lang is implicated in a scandal over his administration’s harsh tactics, and as the ghostwriter digs into the politician’s past, he discovers secrets that threaten to jeopardize international relations forever. Co-starring Olivia Williams and Kim Cattrall, it’s a taut and shocking thriller from acclaimed director Roman Polanski.

No specs or bonus features have been announced yet, but expect “The Ghost Writer” to arrive in stores on August 2 for $26.99 on DVD and $40.99 on Blu-Ray Disc.