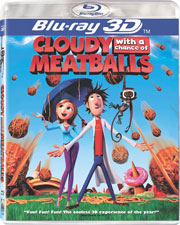 Sony Pictures Home Entertainment has just announced a new version of the animated movie Cloudy With A Chance Of Meat Balls, bringing to Blu-Ray a 3D version of the film later this month.

When Flint Lockwood’s (Bill Hader) latest contraption accidentally destroys the town square and rockets up into the clouds, he thinks his inventing career is over. Then something amazing happens as delicious cheeseburgers start raining from the sky. His machine actually works! But when people greedily ask for more and more food, the machine starts to run amok, unleashing spaghetti tornadoes and giant meatballs that threaten the world! Now it’s up to Flint, with the help of weather girl Sam Sparks (Anna Faris) and Steve, his talking monkey assistant, to find some way to shut down the machine before the world is covered in super-sized meatballs!

The release features the same specs and bonus materials as the previously released Blu-Ray/DVD combo version, but will not include the DVD version found in said 2-disc BD/DVD combo.