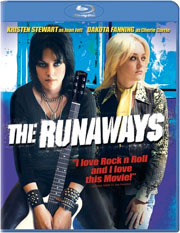 Sony Pictures Entertainment has just added the biopic The Runaways to their roster, bringing the film to DVD and Blu-Ray Disc in July.

Kristen Stewart and Dakota Fanning star as Joan Jett and Cherie Currie in the music-fueled coming of age story of the groundbreaking, all-girl rock band, The Runaways. They fall under the Svengali-like influence of rock impresario Kim Fowley (Michael Shannon), who turns the rebellious Southern California kids into a rock group with outrageous success. With its tough-chick image and raw talent, the band quickly earns a name for itself and so do its two leads: Joan is the band’s pure rock n’ roll heart, while Cherie, with her Bowie-Bardot looks, is the sex kitten.

The DVD version will feature an anamorphic widescreen transfer of the movie with Dolby Digital 5.1 audio. As extras, the release will include a Commentary Track featuring Joan Jett, Kristen Stewart and Dakota Fanning – which should be very interesting, indeed. Also included is Plugged In: Making the Film and a Featurette covering the real “The Runaways”.

The Blu-Ray version offers up a 1080p high definition transfer of the movie, supplemented by a DTS 5.1 HD Master audio track. This release will include the same bonus materials as the DVD version but in addition you will find Sony’s movieIQ trivia track on the release also.