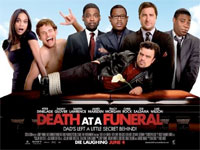 Sony Pictures Home Entertainment has just announced details about the upcoming release of Death At A Funeral, bringing the dark comedy to DVD and Blu-Ray Disc in August.

“Death at a Funeral” is a hilarious day in the life of an American family come together to put a beloved husband and father to rest. As mourners gather at the family home, shocking revelations, festering resentments, ugly threats, blackmail and a misdirected corpse unleash lethal and riotous mayhem.

The DVD version features an anamorphic widescreen transfer of the film with Dolby Digital 5.1 audio. As bonus materials you will find a Commentary Track with Director Neil LaBute and Chris Rock on the disc, as well as Deleted Scenes and the Featurettes ”Family Album,” “Death For Real” and ”Death at a Funeral: Last Rites, Dark Secrets”.

The Blu-Ray version will offer up a 1080p high definition transfer with DTS 5.1 HD Master Audio. It will include the same bonus materials os the DVD version but will, in addition, come with Sony’s movieIQ trivia track feature.