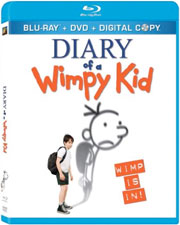 20th Century Fox Home Entertainment has added Diary of a Wimpy Kid to their line-up, releasing the film based on Jeff Kinney’s beloved books on DVD and Blu-Ray Disc in August.

The film chronicles the adventures of wisecracking pre-teen Greg Heffley, who must somehow survive the scariest time of anyone’s life… middle school. Convinced it’s the “dumbest idea ever invented,” Heffley considers junior high school a place rigged with hundreds of social landmines, not the least of which are wedgies, swirlies, bullies, lunchtime banishment of the cafeteria floor and a festering piece of cheese with nuclear cooties that he must overcome to become popular. His diary – or “journal” – chronicles his thoughts, tales of family trials and tribulations, and (would be) schoolyard triumphs.

The Blu-Ray version, arriving as a 2-disc release, will also include the DVD version of the film as well as a Digital Copy.