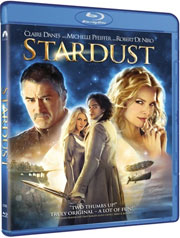 Paramount Home Entertainment has just added a Blu-Ray Disc version of the fantasy movie Stardust to their fall schedule.

In hopes of wooing a beautiful girl (Sienna Miller), Tristan (Charlie Cox) promises to bring her a falling star. But he’s in for the adventure of his life when he discovers the star is actually a celestial beauty named Yvaine (Claire Danes).

When an old witch Lamia (Michelle Pfeiffer) attempts to steal Yvaine’s youth, Tristan must protect her at all costs, in this magical family adventure that will make you laugh out loud and believe in love again.

The release will feature a 1080p high definition transfer with a DTS 5.1 HD Master Audio track, and will also include the Deleted Scenes and Bloopers found on the previous DVD version. In addition, however, the Blu-Ray version will also contain a Commentary Track by writer and director Matthew Vaughn and writer Jane Goldman, as well as the high definition Multi-part Documentary ”Crossing the Wall: The Making of Stardust”, consisting of “The Quest for the Stone…,” “A Portal to Another World…,” “What Do Stars Do?,” “A Quest of Enormous Importance…” and “Have You Seen a Fallen Star?”. Also included is the Featurette ”Nothing Is True”, also presented in high definition, as well as the movie’s Trailer.