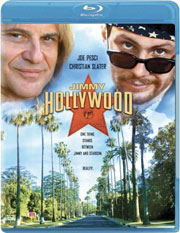 Lionsgate Home Entertainment has scheduled the comedy Jimmy Hollywood for release in July, bringing the film to Blu-Ray Disc for the first time.

Struggling actor Jimmy Alto (Joe Pesci) can’t get arrested. But the criminals that terrorize his neighborhood are making a killing. So Jimmy makes a bold career move. With the help of his loyal but spaced-out best friend (Christian Slater), Jimmy transforms himself into “Jericho,” leader of a mock-vigilante group that videotapes criminals and then turns them over to the police. It’s the role of a lifetime, but when Jimmy gets caught in a crossfire between the cops and the crooks, it looks like it could be his last.

The release will feature a 1080p high definition transfer with a DTS 5.1 HD Master Audio track. No bonus materials have been announced to go with this release.