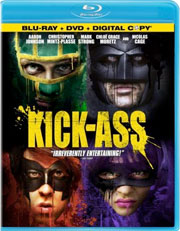 Lionsgate Home Entertainment has added the movie Kick-Ass to be released on DVD and Blu-Ray Disc in August.

“How come nobody’s ever tried to be a superhero?” When Dave Lizewski – ordinary New York teenager and rabid comic-book geek – dons a green-and-yellow Internet-bought wetsuit to become the no-nonsense vigilante Kick-Ass, he soon finds an answer to his own question: because it hurts. But, over coming all the odds, the eager yet inexperienced Dave quickly becomes a phenomenon, capturing the imagination of the public. However, he’s not the only superhero out there – the fearless and highly trained father-daughter crime-fighting duo, Big Daddy and Hit-Girl, have been slowly but surely taking down the criminal empire of local mafioso Frank D’Amico. And, as Kick-Ass gets drawn into their no-holds-barred world of bullets and bloodletting with Frank’s son Chris, now reborn as Kick-Ass’s arch-nemesis Red Mist, the stage is set for a final showdown between the forces of good and evil, in which the DIY hero will have to live up to his name. Or die trying…

The DVD version will feature a Commentary Track, as well as Art Archives and the Featurette ”It’s On! The Comic Book Origin of Kick-Ass.”

The Blu-ray Disc Combo Pack kicks even harder with the same DVD special features plus a documentary-length Making-of Featurette and a feature-length Ass-Kicking Bonus View Mode, which give audiences an inside look at all elements of the filmmaking process. In addition, the Metamenu Remote powered by BD Touch, another Blu-ray exclusive, will allow for iPhone OS and Android users to personalize their experience with this state-of-the-art free app. Once connected through BD-Live, viewers can select menus using intuitive gestures, find scenes by dialogue, discover details about the actors and more.